I received a free copy of this book from Netgalley (thanks!) and it did not affect my honest opinion. 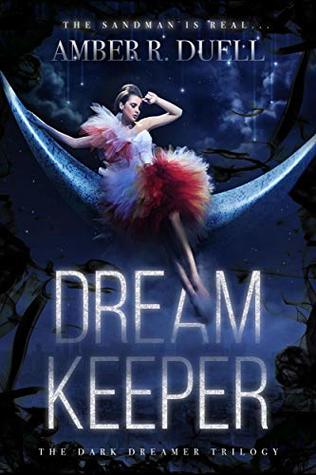 The Sandman is seventeen-year-old Nora’s closest friend and best-kept secret. He has to be, if she doesn’t want a one-way ticket back to the psychiatrist. It took her too long to learn not to mention the hooded figure in her dreams to her mother, who still watches Nora as if she’ll crack. So when Nora’s friends start mysteriously dying gruesome deaths in their sleep, she isn’t altogether surprised when the police direct their suspicion at her. The Sandman is the only one she can turn to for answers. But the truth might be more than she bargained for…

For the last five years, the Sandman has spent every night protecting Nora. When he hid the secret to the Nightmare Lord’s escape inside her dreams, he never expected to fall in love with her. Neither did he think his nemesis would find her so quickly, but there’s no mistaking his cruel handiwork. The Nightmare Lord is tired of playing by the rules and will do anything to release his deadly nightmares into the world, even if that means tormenting Nora until she breaks.

When the Nightmare Lord kidnaps Nora’s sister, Nora must enter enemy territory to save her. The Sandman is determined to help, but if Nora isn’t careful, she could lose even more than her family to the darkness.

Amber R. Duell is a native of Central New York but currently lives in Mississippi with her husband and two sons. She survives on caffeine and baked goods. When not reading or writing, she enjoys snowboarding, embroidering, staying up way too late to research genealogy, and discovering real-life adventures.

The premise was really good. I have a thing for secret + mysterious love interests and mash that up with a well-known legend and you have a sold reader over here! The pretty cover fit well with the summary (and actually has something to DO with the story, not just some random aesthetic) and everything was shiny and sparkly and very promising.

Howeeevvveeer, (I hate to say this) I was disappointed. The beginning was very dull and slow for me even though the brutal and vivid deaths kept coming. It wasn’t about the pacing, it’s more to do with the writing and how the story was delivered. Despite the gruesome deaths, I felt like their impact wasn’t all that moving as supposed to be.

After a few chapters, I was very much disinterested. I  read it in several little tidbits and it wasn’t until halfway through that I said to myself, ‘I spent way too much time reading this book, better finish it. I’ll just get over it already’.

One of the reasons why this was so dull for me was that it lacked mystery in parts that need it. Nora isn’t really the smartest person when it comes to picking up clues, and hse’s pretty much in denial. The story was told in the Sandman’s and Nora’s POVs so the readers get an inside look on what’s going on, but really, it doesn’t take too much to figure out some things.

And the Sandman was not very appealing for me either. Sure, he’s the poor, tortured hero who sacrificed everything. And he also placed a LIFE THREATENING BURDEN ON A TWELVE YEAR OLD GIRL. Just because she “called” to him at that time. And she never even knew the seriousness of the situation until she was SEVENTEEN. Not cool, dude. Not cool.

The Sandman is millenias old and he could not have chosen a better person to hold the secret that could determine the fate of the entire humanity. Note the sarcasm.

I wish the book could have shown more about their story early on. The development of the Sandman and Nora’s friendship. When I was reading the book, I felt like they were strangers who just met and got close immediately. I did not feel the “we’re close friends for around five years now” vibe.

I’m actually feeling guilty to give this book a low rating but “I must not tell lies”. This book did not call me to me and I was very disappointed, that premise just sounded so good. I’ve seen great ratings and reviews of Dream Keeper on Goodreads and even Netgalley, but I guess it isn’t for me. I’m sorry.

If you’re thinking of picking up this book, feel free. I don’t want to hinder anyone from giving this book a chance. We all have different opinions right? So why not give it a try? If you do read it, don’t hesitate to share your thoughts with me! I’d love to hear what you think.

Have you read The Gilded Wolves (already)?

Did you like it? Opinions? Sit down and tell me everything!

If you haven’t read this book yet, is Dream Keeper a must-read on your TBR?I hope it is!