“I am too Northern to be Southern. I am too Southern to be Northern. Eastern to be Western. Western to be Eastern. I belong nowhere, and to no one, and it’s all because of some stupid magic and the words of one person—whose name you don’t even know.”

I received a free eARC from the author (thank you!) via BookFunnel in exchange for my honest review. 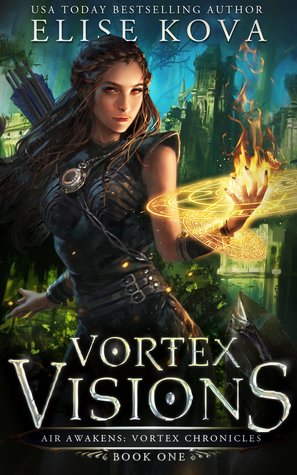 A desperate princess, a magical traveler, and a watch that binds them together with the fate of a dying world.

Vi Solaris is the heir to an Empire she’s barely seen. Her parents sacrificed a life with her to quell a rebellion and secure peace with a political alliance. Now, three years past when her wardship should’ve ended, Vi will do anything to be reunited with her family.

The Empire is faltering beneath the burden of political infighting and a deadly plague. Yet, Vi can’t help but wonder if her inability to control her magic is the true reason her parents haven’t brought her home. Suspicion becomes reality when she unleashes powers she’s not supposed to have.

As Vi fights to get her magic under control, a mysterious stranger appears from across the world. He holds the keys to unlocking her full potential, but the knowledge has an unspeakable price — some truths, once seen, cannot be ignored.

All eyes are on her and Vi must make the hardest choice of her life: Play by the rules and claim her throne. Or, break them and save the world.

NOTE: You do not have to read Air Awakens in order to read this book. Elise Kova did it again! Join us on this new breathtaking series that takes place eighteen years after Air Awakens!

Elise never fails to amaze me with her worldbuilding skills. I was awed by how she created such a unique and lush fantasy world that is known as the Solaris Empire. But in this book, the map has expanded to include surrounding continents and my inner map geek is going nuts! I read Air Awakens a few months ago and to compare that with her the first book in her newest series, I can see how much the author has improved. She has created an excellent setting for the continuation of Air Awakens to take place and I couldn’t be happier. I love every little detail about this gorgeous world!

She has created an intelligent, brave, and strong-minded main character in the next generation of Air Awakens. Vi Solaris would make a perfect Gryffindor. She’s loyal and willing to risk her own life to protect her friends, family, and loved ones. You don’t know how relieved I was when she obviously wasn’t a dumb, annoying, or naive character (I’m not hinting at anything/anyone).

The side characters are amazing too. There’s a deep bond running between Vi and her two closest female friends. Vi adores her family and it’s touching how she lets nothing stop her from loving her family, not distance, not even time.

The plot is unique and at the same time there’s something similar to Air Awakens. I haven’t started reading book 2 of Air Awakens yet but I squeal like a kid whenever someone from the first book pops up!

The storyline of Vortex Visions is riddled with plot twists. I literally cried with shock (and denial?) when a certain SOMETHING happened (you’ll soon know what I’m talking about).

Wait, there’s more! Vortex Visions has a haunting atmosphere to it, mostly because of its dark and ancient mythology. This book has a whole different aura compared to Air Awakens. The original was light and loose while this new installment is much, much darker.

This book is so bold, colorful and full of life and adventures! Elise Kova truly is a passionate writer and this book is proof to that. This is already turning into an overwhelming series and I look forward to more tears and laughs to come. Vortex Visions will satisfy the mystical needs of every fantasy fanatic!

“You did well, but things are only beginning now. The vortex still spins.”

Have you read Vortex Visions? How about Air Awakens?

If you have, what are your opinions on VV?

Are you a fan of fantasy?

What other books by Elise Kova have you read?

Is this book on your TBR or is it a no-no for you?

By the way, thank you for taking the time to read this post!