Blog Tour hosted by Fantastic Flying Book Club. Thanks for the chance!

Title: The Exact Opposite of Okay (Izzy O’Neill #1) 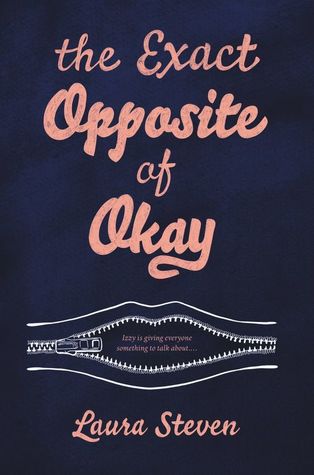 Bitingly funny and shockingly relevant, The Exact Opposite of Okay is a bold, brave, and necessary read for fans of Louise O’Neill and Jennifer Mathieu.

Eighteen-year-old Izzy O’Neill knows exactly who she is—a loyal friend, an aspiring comedian, and a person who believes that milk shakes and Reese’s peanut butter cups are major food groups. But after she’s caught in a compromising position with the son of a politician, it seems like everyone around her is eager to give her a new label: slut.

Izzy is certain that the whole thing will blow over and she can get back to worrying about how she doesn’t reciprocate her best friend Danny’s feelings for her and wondering how she is ever going to find a way out of their small town. Only it doesn’t.

And while she’s used to laughing her way out of any situation, as she finds herself first the center of high school gossip and then in the middle of a national scandal, it’s hard even for her to find humor in the situation.

Izzy may be determined not to let anyone else define who she is, but that proves easier said than done when it seems like everyone has something to say about her.

Laura Steven is an author, journalist and screenwriter from the northernmost town in England. The Exact Opposite of Okay, her YA debut, was published by Egmont in March 2018. The sequel, A Girl Called Shameless, will follow in 2019.

As well as mentoring aspiring authors through schemes like Pitch Wars, Laura works for Mslexia, a non-profit organisation supporting women writers. She graduated with Distinction from her MA in Creative Writing in 2017, and her TV pilot Clickbait – a mockumentary about journalists at a viral news agency – was a finalist in British Comedy’s 2016 Sitcom Mission.
​
Laura is represented by Suzie Townsend of New Leaf Literary and Media Inc.

One of the things I love about this book is how straight to the point it is. No sugarcoating, no beating around the bushes. THIS is what the world needs. The truth. Not a sugarcoated “feminist” damsel-in-distress story. Where the character’s aren’t perfect, and the plot could very well be true-to-life.

This is a brilliantly rebellious book. Nothing sparkly and shiny, but has lots of rough edges and very, very gritty. A tough book, and a really good one.

Need I say any more? Please do read this book. Everyone needs to. The world needs to.

“Bitches bite back. And men hate that. Society hates that.”

“What do I want to be now? Bold. Fierce. Honest. A fighter. A revolutionary. A bitch. Because the way the world treats teenage girls – as sluts, as objects, as bitches – is not okay. It’s the exact opposite of okay.”

“Because you know my motto: do no harm, but take no shit.”

TOUR SCHEDULE: THE EXACT OPPOSITE OF OKAY (IZZY O’NEILL #1) BY LAURA STEVEN

2 thoughts on “Blog Tour: The Exact Opposite of Okay by Laura Steven [Review + Giveaway]”